The Yoshida Nursery was started in 1922 by Nobuji and Tame Yoshida at 7624 Krause Avenue, Oakland. The Yoshidas lived at Krause Avenue for 14 years, during which time six children were born: Yuki, Hideo, Chiyo, Michi, George, and Kiyoshi. Everyone in the family pitched in to help run the nursery, doing different chores to help grow the nursery’s carnations, roses, snapdragons, cyclamens, mums, and sweetpeas. In 1937 the Yoshidas closed the nursery on Krause Avenue and took over the Takata Nursery at 10900 Edes Avenue in Oakland, next door to the Korematsu Nursery. The Yoshida Nursery on Edes Avenue once again grew cut-flowers but also added potted plants such as Easter lilies and ivy. When the Yoshida family was evacuated to Topaz, Utah during WWII, the nursery was left under the care of a Castlemont High School shop teacher. Certain that they would return soon, and confident in the shop teacher’s intentions, the family left all of their belongings behind. Unfortunately the shop teacher turned out to be untrustworthy and his promises to look after the nursery and pay the mortgage were never carried out. The family was notified in Topaz that the bank had repossessed their property. After the war the family worked at Seabrook Farms in Pennsylvania before returning to California. Since they had lost everything they owned in Oakland the Yoshidas decided to start over in Southern California. They eventually opened a potted plant nursery in Los Angeles that operated until 1992. 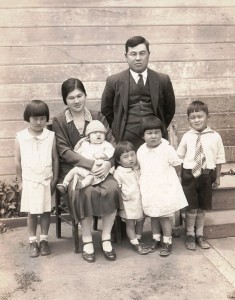 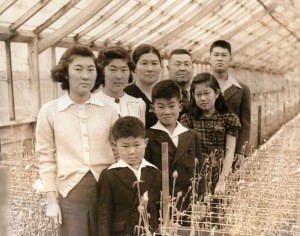 Nobuji and Tame Yoshida with their 6 children at their Edes Ave. nursery, 1940.