Zenjuro Shibata started his first nursery in 1906 on 105th Ave. in Oakland. In 1913 he married Koyuri Otsuka and began a family. The Shibatas remained in Oakland until moving to Hayward in 1918 to establish Mt. Eden Nursery. After WWII the nursery came under the leadership of the oldest Shibata son, Yoshimi. At age 32 Yoshimi married Grace Eto. They had three children: Naomi, Robert, and Michael. All of the Shibata children have played an active role in the nursery. For almost a century the Mt. Eden Nursery has continued to expand and evolve. Today it is a wholesale flower distributor based in San Jose, led by Robert Shibata. The original nursery in Hayward operated through the 1980s. The greenhouses were finally demolished in the 1990s. 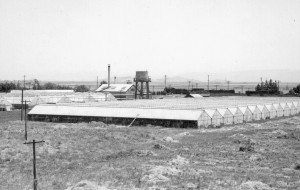