Yuriko was born to her parents Jujiro and Teru Sugihara in 1915. Soon after she was born the Sugiharas bought 2.5 acres of land in Richmond where they started the Sugihara Nursery. Yuriko had four siblings: Fumiko, born in 1917, John, born in 1919, George, born in 1921, and Gilbert, born in 1931. The whole family was involved in running the nursery, spending many long hours in the greenhouses and packing houses.

While the Sugiharas were interned at Utah’s WWII Japanese internment camp, Topaz, a nearby nursery run by the Aebi family watched over their nursery as well as several other Japanese nurseries in the neighborhood. Because of their generous help the Sugiharas and others were able to resume their businesses when they returned from Topaz.

At the end of the war Yuriko married Masao Yokota. Together they bought a nursery in San Leandro, next door to the nursery run by Yuriko’s sister, Fumiko, and her husband, Henry Wada. Over the years the Yokotas expanded their business, eventually buying the Wada Nursery. The Yokota Nursery continued to operate on Marina Blvd. and were the last rose growers in Alameda County when they finally shut down in the early 2000s. 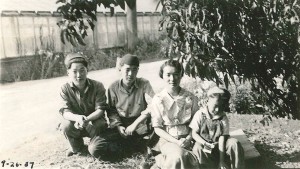 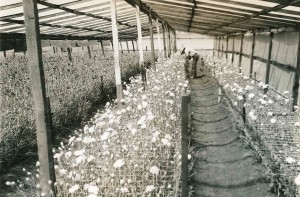 Hard at work in a Sugihara Nursery greenhouse.