In 1906 Hirokichi Hayashi and his brother Tomoichi Kitano opened the Hayashi Nursery at 2239 73rd Ave., Oakland (originally the corner of Thomas Ave. and Yoakum). In 1912 another brother, Kunitaro Minami joined the Hayashi Nursery. The nursery moved to Union City in 1949 where Henry, Warren and Norm Hayashi operated the nursery until 1993. 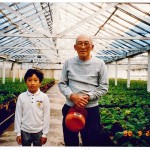