Kotaru and Chu Sakai came to the U.S. from Japan in 1897.  The couple began the Sakai Nursery in 1906 when they bought 2.5 acres of land in Richmond, where they began growing carnations. In 1923 the Sakai Nursery branched out and began growing roses. During World War II the family was sent to an internment  camp in Rohwer, Arkansas. The nursery was leased to an Italian American flower shop owner. After the war the family returned to Richmond to reclaim their rose nursery despite attempts to discourage them from doing so. By 1946 the three brothers, Tetsuma, Sam and Roy, had rebounded successfully and expanded their business by opening a second nursery in Hayward, near present day Tennyson High School. Together the Hayward and Richmond locations produced as many as 4.5 million stems of high quality roses a year, selling to florists across the U.S. The Sakai Brothers Rose Co. had many years of great success. But due to increasing competition from South American rose companies, the Hayward nursery closed in 1997 and the Richmond nursery eventually closed in 2002. 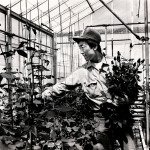