While Elsie and her siblings were educated in Japan between 1919 and 1926, the El Cerrito nursery continued to expand. In 1930 the family opened a floral shop on San Pablo. 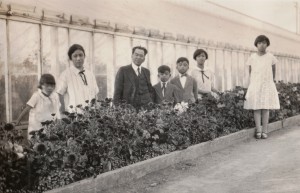 Isaburo and Wakako Adachi with their five children in front of one of their greenhouses.