Sunnyside Nursery was started in Oakland by Eisaku Yoshida around 1915. Eisaku married Kino Kamano in 1919 and started a family that eventually consisted of three sons and four daughters. The nursery operated successfully throughout the 1920s and 30s, affording the Yoshida family to build a large five bedroom home. During WWII the Yoshidas were incarcerated at the Tule Lake Relocation Center. The eldest Yoshida son, Eiichi, was the first to return to Oakland after the war. Upon his return he found the Yoshida home and greenhouses, which had been leased in their absence, a mess. After much work evicting the wartime tenants and repairing the greenhouses, the family eventually reopened the nursery. The nursery got back on its feet and operated in Oakland until relocating in the 1950s when Eiichi bought 15 acres in Hayward.  With the involvement of Eiichi’s brothers, and his wife Fusae, the nursery continued to expand, diversify, and innovate, being the first growers to try and do many new things within the industry. They were one of the first to get involved in supermarket merchandising, to trademark their logo colors, to advertise in Sunset magazine, to bring their plants to a produce association trade show, and much more.  Their creativity and business sense enabled them to open additional nurseries in California and outside of the country. Eiichi served as President of the California Flower Market for 20 years. The nursery eventually closed, selling its Hayward property to a housing developer and its Salinas greenhouses to a Japanese seed company. 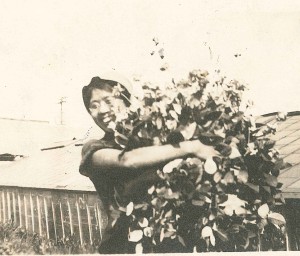 Kin Kamano Yoshida with roses at Sunnyside Nursery in Oakland.