Tomojiro and Seki Nomura bought the Nishihara Nursery on 163rd Avenue in San Leandro shortly before 1920, establishing the Nomura Nursery. They specialized in carnations but also grew sweet peas, Gerbera daisies, and mini carnations. Tom and Seki had three children: Haruka, Shizue, and George.  During WWII the Nomuras were interned at Gila River, AZ. When they returned home after the war the nursery was in horrible shape. The family worked tirelessly to clean up the nursery and re-establish their business. In 1948 George married Jean Nakano, who grew up at the Nakano Nursery in Oakland. Together they helped work the Nomura Nursery and started a family. They had three children:  Georgene, Dagne, and Roxanne. A new greenhouse was added to the nursery for every child born. Eventually the Nomura Nursery held 10 greenhouses on 5 acres of land. George, Jean, and George’s sister, Haruka ran the entire nursery until deciding to shut down in 1986. 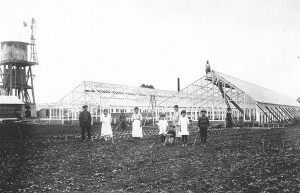 Greenhouses being constructed on the Nomura Nursery, 1920s. 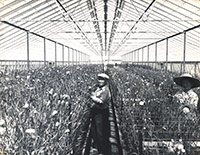 Mr. and Mrs. Nomura tending the carnations in their greenhouse. 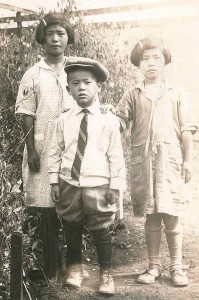 Haruka, George, and Shizue in the greenhouse, 1920s. 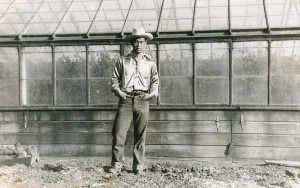 George posing in cowboy gear by a greenhouse, 1930s.