Takako was born in Berkeley on 24 August 1917 to her parents Mareyo and Iku Tsuchiya. After several unsuccessful attempts at different businesses including a chicken ranch and a restaurant, the Tsuchiyas got into the cut flower industry in 1920. The nursery originally belonged to Mrs. Fukuzumi who taught the Tsuchiyas how to grow roses. Eventually the whole family was involved in the nursery. Takako and her siblings worked at the nursery throughout their childhood and even into early adulthood. During WWII the San Lorenzo Nursery looked after the Tsuchiya’s property. When they returned from Topaz the Tsuchiya Nursery reopened under the management of Takako’s brother, Takenori. The nursery stayed in operation until the pressure of development and the changing flower market caused its closure and the sale of its land. 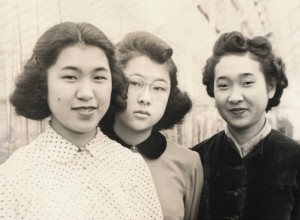